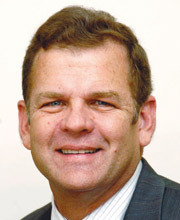 Christopher Wright was born and educated in Cairns. He moved to Brisbane to study Law at the University of Queensland before returning to Cairns to commence his articles of clerkship.

He has been a Solicitor for over 30 years and has been at Murray & Lyons for nearly that long.

Chris is an Accredited Specialist in Family Law and heads up the firm’s Family Law Section.

In 2014 Chris was made a life member of Saints Junior Soccer.

Jamie McAlister became a Partner on 1 July, 1998. Originally from Townsville, he moved to Cairns to commence his articles of clerkship with the firm in 1993 and was admitted to practice as a solicitor in 1995.

He practices in the area of personal injuries, litigation and in particular seeks compensation for those injured in motor vehicle accidents, work site accidents and public liability matters.

Martin Treston was admitted to the partnership on the 1 January 2005. Born and raised in the Innisfail district, he obtained his Law degree at the University of Queensland and was admitted as a solicitor on 3 February 1997.

Martin is the commercial partner but practices in a wide variety of legal areas.

In 2013 Martin was made a life member of Saints Junior Soccer.

Local lawyers serving the Cairns region for over 100 years